New Brunswick Premier, Brian Gallant, delivered his first State of the Province address last night.  I wasn’t able to go because I’m taking an online course on Wednesday evenings, but I caught up with the highlights in the news today and it was definitely the topic of conversation for the day.

The above quote was from the Premier on engagement. And I couldn’t agree more.  I’ve never talked to anyone who didn’t have any opinions on governance or in some way, want to get involved – I think most people just feel like nothing will ever change.  But I was happy to have my theory that things can and will change (and are always getting better) confirmed by Hans and Ola Rosling in their TED talk, controversially titled ‘how to not be ignorant about the world‘. I liked the theme of optimism that seemed to ring through the speech and I was really happy to hear that Premier Gallant also discussed getting women into more positions of influence in New Brunswick – a great gesture towards parity, continuing on the heels of his commitment and delivery on removing the ‘2-doctor rule’ for access to abortions in New Brunswick.

I grew up in the era of the Ghostbusters TV show, and will admit that I had the dolls (figurines) and that my favourite was SLIMER.

(look at that FACE!)

Social media told me today that Paul Feig, of Bridesmaid fame, will be directing a Ghostbusters reboot with a female lead cast.  I’m so excited.

The critic in me points out that a male director is making this movie – would people see it differently if a woman was directing? Though the other part of me reminds the critic that I’m hoping for a day where those things don’t matter – it’s just people making movies about stories that they want to tell.  And I’m glad Mr. Feig wants to tell the story. I hope that it’s as awesome as the original.  And yes, I’m looking forward to Slimer.

Rolling Stones article on it here.

It was a blustery snow day here in Fredericton today. I also woke up with the beginnings of a cold so it was mostly a ‘work-from-the-couch’ kind of scenario and try to get some rest.

While checking my e-mail, I found a great video. Awhile ago I signed up for Marie Forleo’s blog (vlog?) and saw one of her videos come through today about prioritizing: her recommendation was to begin each day by labelling your to-do list with ‘I’ for important or ‘u’ for urgent. The urgent will always get done – the important stuff is what matters. So I structured my day that way. It was great. (I realize that I found the video while doing the ‘urgent’ work of checking my e-mail)

I also went back to Seth Godin’s blog, as I hadn’t been there in awhile and read a post by his Special Project lead, Winnie on getting unstuck and her one-week challenge of making a blog post every day. So I’m taking her up on it. 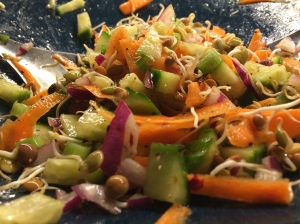 Continuing on my 2015 themes of food and feminism, here is tonight’s salad.  Thrown together with what I found in the fridge on this little snow day:

We’ve also been trying to cook everything in the freezer.  Which means that I’ve been eating meat, which isn’t my favourite, but I’ve made amends with myself about it by acknowledging that it’s better than wasting it and it’s all meat that has been locally sourced from my parents (with the exception of one turkey, which I’m not quite sure what to do with…!)

I’ve re-titled this blog to reflect some of my focuses for this coming year.  They’re both things I think a lot about: food and feminism.

My thoughts here are about feminism and the fact that I feel like 2014 had some real watershed moments for women. It was a year where the conversation started to change in the media, and I can’t wait to see how it continues to develop.

The Jian Ghomeshi scandal broke at the CBC.  I was so disappointed to learn that a man who portrayed himself on radio as a advocate for equity did not ‘practice what he preached’ – quite the opposite.  The Bill Cosby story re-broke. Dalhousie dentistry’s rape culture Facebook group was brought to light. Nobel Laureate, Jimmy Carter wrote a book called ‘Call to Action’ to highlight the systemic violence against women existing in our world. And that’s just the tip of the iceberg.

I personally believe it’s important to bring these issues to light and to talk about them so that we bring the aspects of our culture that marginalizes women into light. So that we have the words to talk about it.

This year, I’m going to keep track of the things I hear people say that continue to marginalize women.  For the most part, I believe that these are things said by people who just haven’t talked much about women’s issues and who generally don’t realize that talking this way contribute to the problem.  I don’t think they are bad people. But I do hope that by highlighting these seemingly innocuous words will help add to the conversation designed to bring about a better future.

To date this year, I have heard:

At frisbee practice, to a man on the field: ‘Stop running like a girl’.
In discussing literature: ‘I don’t like women authors’.  (You’ve read them all?)