I think Street Fighter was the last game I played seriously in my middle school gaming days and MY OH MY did I love it. Maybe that’s why I kept thinking of a street fight analogy for the next step of my plan.  That, along with watching Brene Brown’s great TED talk where she talks about being in a ‘year-long street fight’ before truly coming to terms with her work on vulnerability and shame.

Of note?  She was in a street fight with herself.  So was I.

In my experience, it’s true that it gets harder before it gets easier.  I was about to enter the dip.  Yep, back to the ol’ Seth Godin references.  This graph nails it for me. 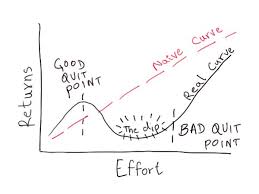 The dip felt like a street fight, complete with hadouken projectiles.

Leaving my position was both easier and harder than I thought it would be. I wrote my director a long letter explaining my decision – a short, form-letter resignation letter didn’t feel right to me.  I sincerely appreciated the opportunity, got to travel, learn a ton and accomplished a fair bit in the year I was there. He handled the news with grace and understanding and we got to work on filling the gap. I re-learned that it’s better to make way for someone else than to try to force a fit.  Through reshuffling some territories and responsibilities, my decision to pursue the next thing for me created jobs for 3 younger salespeople.  Win-win, the outcome I’m chasing. I had the opportunity to work with 2 of the young men who were going to replace me and it was a true honour – they’re both very early in their careers and total movers and shakers.

I was sad to leave the people I worked with, though I knew this position wasn’t the right fit for me.  I was a little sad to leave my comfortable routines too. It was also hard because of the moments of self-doubt, of asking myself whether the critics would be right.

People did say the expected things – ‘you’ve been moving jobs a lot’ and ‘are you sure you really gave it a go?’ and the ‘you gotta give it 2 years’.  Those comments were a bit exhausting as I knew they weren’t true for me and I was already tired from being in the ‘dip’ aka street fight.  I was unsure how much to justify or explain my decisions to others.  I’m still unsure on this, though I’m landing at the conclusion that my response should come after assessing the intention of the comments.  Sometimes people (me included) have our good intentions come out as a challenge or negativity to others simply because we care about them. Another important reminder for me.

I mentioned this in the last post, though I knew I hadn’t really been moving jobs that much. I’d primarily been working in short-term contracts, and while I wasn’t necessarily following a linear career path, I knew why I had made all of the decisions I had. I was also 100% certain I gave it a go. And the 2 years comment just seemed completely arbitrary.  I’m wholly unsure why you should stay in something (job, relationship) that you know isn’t right for you to fulfill some sort of obligation to society – as long you know you did the hard work of assessing why it wasn’t a fit for you and how you ended up there.  It seems like learning something from the experience is more important than counting the days.

I listed my property, which has since sold.  Also hard.  I love that place, though I’m ready to make space for the next thing.

I bought tickets to travel southeast Asia.  I had already set the funds for this aside. I found loving places for my dog and cat (and I CANNOT WAIT to see them soon).

I got on the plane. I made it. I even had a lead for a remote project management gig with a great organization (Simple Square) come through after I arrived in Asia.  This was great because it appeased my pragmatic mind to ensure that I: a) have income coming in on the trip and more importantly, when I come home, and b) am still challenging myself to learn and grow from people whose work I admire.  It helps mitigate my risk, making my leap more of a calculated one.

This is me the day after we landed. A reminder that we can do anything but not everything.

I’ve learned a lot on this journey so far – a lot about other places and mostly, a lot about myself.  I’ve visited 4 countries and 12 cities – all with only a 28-L pack.  There have been a lot of magical and a lot of tiring moments – hanging out with rescued elephants in a group of people from around the world, people trying to scam you over and over again because they know you’re a traveler, eating amazing food from street markets, waking up unable to breathe due to malaria meds (only taking those again if I actually GET malaria), scootering around the mountains of Northern Thailand, crashing a scooter coming down from one, touring the largest religious monument in the world, witnessing incredible poverty and injustice, and meeting resilient young people with very few resources who are working so, so hard.  A reminder of the importance of radical self ownership.

My word of the year = radical.

I was originally planning to be away for 6 months and decided to change that to 2.  I didn’t see all of southeast Asia, though I already have my next trip planned.  I’m heading home because I’m ready.  I’m eager to start the next chapter (and face the next dip).  I have a few opportunities to weigh and I’m not fully decided exactly which way I’m going to take it, though I have a framework for making this decision.

Nice to meet you, 2018.  Looking forward to getting to know you.